In the second phase of the century. XVIII, a Mineira school emerges, so called because it flourishes in the main centers of the province of Minas Geraes, to which school really notable poets belong.

Epic. – According to agooddir, José Basilio da Gama (1741-1795) published in 1769 a not long poem, Uruguay, in which he deals with the brief war waged by Portugal and Spain against the indigenous people of the Missions of Uruguay, who, incited by the fathers of Company of Jesus, they had rebelled against the treaty of 1750. The poem contains valuable and moving verses, in which the artist surpasses all his ancestors for the feeling of the American land, naturalness, grace and elegance. The poem Quitubia and other less important compositions are due to the same author. But Uruguay occupies a notable place in the history of Brazilian literature, as a poem that already contains romantic tendencies.

José de Santa Rita Durão (born 1717) gave birth in 1781 the epic Caramurú, concerning the splendor of his country from the discovery of Bahia to the expulsion of foreigners. The Caramuru has no originality and the art of the ‘ Uruguay, though not lacking in advantages: breadth of conception, good language, good style, sense of observation, descriptive art. The author has the superiority of culture over Basilio da Gama.

We also mention the poem Villa – Rica by Claudio Manoel da Costa, printed only in the century. XIX, many years after the author’s death.

The Arcadians. – Arcadia Lusitana or Ulissiponense was founded in Lisbon in 1756 by Antonio Diniz da Cruz e Silva and Manoel Nic lau Esteves Negrão to “form – are the words of the statute – a school of good teachings and good examples in the field of eloquence and of poetry, to serve as a model to young people and scholars and to spread throughout the nation the ardor to restore the ancient beauty of these forgotten arts “. Arcadia lived for about twenty years, and then resurrected with the name of New Arcadia. In Brazil the greatest representative of Arcadism was Claudio Manoel da Costa (born in 1729), Glauceste Saturnio, who, endowed with a wide and beautiful culture, even if not a great poet, contributed, and a lot, to the development of Brazilian poetry, because his poems, in terms of technique and language, are perfect. He died in prison in 1789, for having participated in the conspiracy known as the Inconfidencia. But the greatest poet of the Mineira school was Thomaz Antonio Gonzaga born in 1744 and died in exile in Angola between 1807 and 1809, for having taken part in the aforementioned conspiracy, author of the most esteemed love songbook in Portuguese, Marilia de Dirceu, which from 1792 to 1919 had no less than 34 editions. In his verses, in still scrupulously classical forms, there is already some thrill of the imminent romantic sensibility. Then came José Ignacio de Alvarenga Peixoto (1744-1793), who, among other things, translated Maffei’s Merope ; Manoel Ignacio da Silva Alvarenga (1749-1814), poet of transition between the secentism of Claudio Manoel da Costa and the subjectivism of Gonçalves Dias, between arcadians and romantics.

Satirical. – It is not known for sure who was the author of the Cartas chilenas, published for the first time, only, in 1845 by the Revista Minerva Brasiliense ; but it seems they can be attributed to Thomaz Antonio Gonzaga; the poem shows great progress over the others of the same kind that appeared in Brazil, after Gregorio de Mattos. Other satirists: Antonio Mendes Bordallo, João Pereira da Silva, Costa Gadelha, José Joaquim da Silva and Francisco de Mello Franco; and the lyricists Domingos Vidal Barbosa, Bento de Figueiredo Tenreiro Aranha and, especially, Domingos Caldas Barbosa (1740-1800).

Instead, in the first decade of the century followed. XIX, decisive years for Brazilian literature and for the formation of the Brazilian nationality. The transfer of the court and the government from Lisbon to Rio de Janeiro puts an end to the colonial regime. The capital is now in Brazil, which is acquiring new organs, new functions, new life. A press is built, the first newspapers and magazines are built, schools and cultural institutes, including a library.

The disagreement with Portugal distracts the attention, consideration and interest of the Brazilian people from the transient kingdom. Young people are not just going to study in Coimbra now: there are other cultural centers in Europe. From this contact with the main centers of European civilization, in which, precisely around this time, the advent of a new literary formula stirred the minds, the movement arises, the first manifestation of which in Brazil will be, in 1836, the Suspiros poeticos and saudades of Gonçalves de Magalhães.

But, before proceeding further, we will recall the main writers, prior to the first phase of Romanticism. In the poem, the influence of the Portuguese arcades is still felt, slightly modified by the teachings of the encyclopedists and Rousseau: Fr. Antonio Pereira de Souza Caldas (1762-1814), of sincere sensitivity, author of lyrics and religious and moral poems; fra Francisco de S. Carlos (1763-1829), author of a poem on the Assump ç ão da Santissima Virgem ; José Eloy Ottoni (1764-1841) and José Bonifacio de Andrada e Silva (1765-1838), the most complex spirit of the time, scientist, moralist, orator, politician and poet.

In prose, names of real value are mainly: Mont’Alverne (1784-1850), popularizer of German, French and English philosophy, famous sacred speaker, and José da Silva Lisboa (1756-1836), viscount of Cayrú, the opera literary of which it was essentially consecrated to the interests of the country; author of the Historia dos principaes successos politicos do Imperio do Brasil (1810) and of many historical, economic, juridical memoirs, etc. Mariano José Pereira da Fonseca (1773-1848), Marquis of Maricá, was one of the nicest figures of the pre- romantic period, author of Maximas, pensamentos e reflexões, which can still be read with pleasure today. José Feliciano Fernandes Pinheiro (1774-1847), historian of merit, was the author of theAnnaes from Capitania de S. Pedro and Memorias. Hippolyto José da Costa Pereira Furtado de Mendonça (1774-1823) in his Brazilian Correio fiercely attacked the rulers of his country.

Among the later classics and the first romantics, we must mention some poets, which Sylvio Romero ascribed to a transitional group, such as Maciel Monteiro (1804-1868), Odorico Mendes (1799-1868), translator of Homer and Virgil, and Salomé Queiroga (1810-1878). 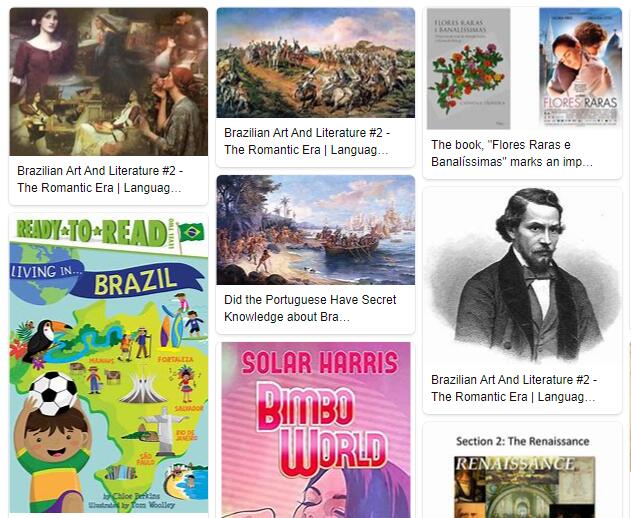