Make one of the world’s most legendary and beautiful treks to Mount Everest Base Camp. You will not only get close to some of the highest mountains in the world but will also experience the breathless and at the same time down-to-earth life of the Sherpa people.

Everest Base Camp – this is a physically challenging trek that takes you through the Sherpa people’s magnificent homelands, small, pleasant villages and roads lined with colorful stone tablets with the “om mani padme hum” mantra inscribed on and past Buddhist monasteries. The hike also offers stunning views overlooking a string of pearls of the world’s highest mountains; Mount Everest, Lhotse, Makalu and Cho Oyu just to name a few. Know more about Nepal on findjobdescriptions.

On the trip, of course, there is also time to experience Nepal’s capital Kathmandu with its narrow alleys, historic temples, impressive stupas and lively markets.

In this travel proposal, it is a 13-day trekking, but the trip is 18 days so that you have plenty of time to acclimatize and thus increase the chances of reaching the entire destination properly.

You travel from Scandinavia to Nepal and the capital Kathmandu

You arrive in Kathmandu. Be sure to bring $ 50 in cash and 2 passport photos to your Nepalese visa upon arrival. You meet and drive to your guest house in Kathmandu where you have 2 nights. If you would rather stay in a hotel, we will of course arrange it. The rest of the day is on its own.

Day 3: All day on your own in Kathmandu

Kathmandu is an incredibly exciting and lively city with lots of history, culture and sensory impressions. Head to Durbar Square with countless beautiful temples, the “apt temple” Swyambhunath, Nepal’s largest Buddhist stupa Boudanath and Nepal’s most important Hindu temple Pashupatinath. Explore the city’s alleys and alleys and experience everyday life in one of the world’s most fascinating cities. If you want us to book a day trip for you with an English-speaking guide, we are happy to do so.

Departure from Kathmandu in the morning. In clear weather, it is an incredibly beautiful journey from Kathmandu to Lukla which is located at an altitude of 2800 meters. Everest and the Khumbur regions are home to the Sherpa people and the world’s highest mountain, Mount Everest. It is a great experience, both naturally and culturally, to trek here with some of the world’s highest mountains in the background through villages where the Sherpa people live and have their everyday lives. From Lukla, the hike winds down through pine forest via Chablung and Ghat to the village of Phakding. If the view is clear, you can already see the snow-capped mountain peaks today. Trekking time: About four hours. Elevations: Kathmandu 1350m, Lukla 2840m, Phakding 2600m.

After breakfast, continue the trek north towards Jorsale by following the river Dudh Koshi. This is where you get to Sagarmatha (Everest) National Park itself and the journey in the park begins with a short hike to the two rivers Imja Drangpa and Nangpo Tsangpo (Bhote Koshi) which you cross by crossing a suspension bridge. After that, it is a two-hour hike up until you reach Namche Bazaar, the capital of this region. Namche Bazaar is a very prosperous sherpa town and an important trading center for the area. Trekking time: About six hours. Elevations: Namche Bazaar 3440m.

Namche Bazaar is a perfect place to have a rest day and get used to the heights. You can also choose to hike up to Khunde Hospital and the Everest Hotel, both of which offer beautiful views. Those who want to take an early morning and walk to the national park’s nice little museum from where you have the opportunity to look out over some of the world’s highest mountain peaks; Mt. Everest, Mt. Lhotse, Mt. Nuptse and Mt. Ama Dablam. Trekking time: About four hours.

From Namche Bazaar it is first an easier hike for an hour and then it goes downhill for an hour and a half. After that, there will be a hike uphill for just over a couple of hours to Tengboche. Along the way, the mood is maintained by superb views of Everest and Ama Dablam, lush forest with pine, birch and rhododendron bushes, animals and birds. In Tengboche is the beautiful Tengboche Gompa, the most important monastery of the Sherpa people and the center of Buddhism in this area. In the evenings, one hears the characteristic sounds of wind instruments used by monks and llamas in their religious ceremonies. Trekking time: About six hours. Heights: Tengboche 3860m.

Today, a pleasant and gradual climb in the terrain awaits up to Dingboche, which is located at an altitude of 4300 meters with fantastic views of the mountains. Hiking goes through forest and colorful rhododendron bushes and through small sherpa villages. Trekking time: About six hours. Elevations: Dingboche 4300m.

We have added a rest day here as you are now up to really high altitudes. You can either stay in place, rest and enjoy the view over Ama Dablam, Kantega and Nuptse. Or do a day hike in the surroundings that takes between 3-5 hours.

Today we follow the valley where you enjoy the view of the two impressive mountain peaks Cholatse and Tawache. We hike up to Khumbu Glacier and on the way you meet many cairns erected in memory of sherpas who lost their own lives while trying to help others reach the top of Mt. Everest. You walk along the foot of Mt. Everest until you reach Lobuche which is the destination of the day. Trekking time: about six hours. Elevations: Lobuche 4930m.

Early morning with 3 hours of hard but beautiful hike along the Khumba Glacier towards Gorak Shep. Here you take some well-deserved rest to continue towards Everest Base Camp. The hike there takes about 5-6 hours and there is plenty of time to enjoy both the view and the feeling of reaching the destination before the journey back to Gorak Shep. Trekking time: About nine hours. Elevations: Gorak Shep 5170m, Everest Base Camp 5350m.

Another early morning hike to one of the most beautiful viewpoints in the Everest region; Kala Pattar. Here you can enjoy the sunrise and the view out over Mt. Everest before we hike back to Gorak Shep where breakfast awaits. After the meal, the hike continues, mostly downhill, to Duglha and then on to Pheriche. In Pheriche, the HRA (Himalayan Rescue Association) has a rescue center for injured hikers and mountaineers that is really interesting to visit. Trekking time: About eight hours. Heights: Bare Pattar 5550m; Pheriche 4370m.

Today we meet again the river Imja Khola and by following it we walk through Pangboche and on to Phortse. Drawing time: About five. Elevations: Phortse 3860m.

From Phortse we then go down to the bridge that takes us across the river Dudh Koshi. From there we start so calmly and carefully walking in the steep terrain up towards Mongla to finally reach Namche Bazaar. Drawing time: Approximately five hours. Elevations: Namche Bazaar 3440m.

From Namche Bazaar it is surprisingly easy to walk down to the village of Jorsale. We follow the road past the small villages Phakding and Choplung to end in Lukla. Drawing time: Approximately seven hours. Heights: Lukla 2840m.

Early in the morning the flight goes back to Kathmandu, a flight of about 45 minutes and if the weather is clear the view is formidable!

Day 17: Kathmandu on your own

You have the whole day to continue exploring Kathmandu. We are happy to help you with tips and suggestions.

Day 18: Flight from Kathmandu and arrival in Scandinavia

Departure from Nepal and arrival in Scandinavia after a fantastic adventure in Nepal.

Everywhere among the Nepalese mountains there are tea houses. These were – and still are – places where porters, travelers and merchants spent the night and ate under simple conditions. Today, many tea houses have been renovated and the standard is significantly higher than before, but it is still a simple accommodation. Accommodation is in double or single rooms with shared toilets in the corridor. 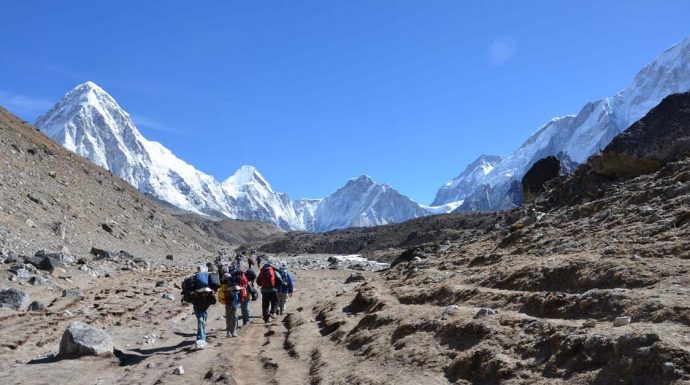