Join us on a wonderful boat trip between Dubrovnik and Split with visits to the wonderful Dalmatian islands of Sipan, Korčula, Brač and Hvar. You sail with the ship MS Dalmatia and there are plenty of opportunities to snorkel and swim in the blue waters of the Adriatic Sea, explore the historic cities and taste local specialties and wines. Learn more about economy of Croatia on ebizdir.

Begin your journey with a night in the pearl of the Adriatic Dubrovnik. Here you have time to walk along the two kilometer long city wall for a wonderful view over the reddish brown rooftops, Lovrijenac fort and out over the Adriatic Sea. The next day you board the ship MS Dalmatia which will be your home for the next six days as you explore Dalmatia’s islands Sipan, Korčula, Brač and Hvar.

The days on board the boat combine relaxation with tours of the islands and the opportunity to make excursions to vineyards, among other things. The boat docks at beautiful beaches and small lagoons so you can enjoy snorkeling or swimming in the azure waters. Local specialties are served and from the bar on board the boat you can buy drinks that can be enjoyed on the large sun deck.

After six days at sea, you arrive in Croatia’s second largest city, Split. This is where the boat trip ends and you head to your hotel in the heart of the city. Explore Split and the magnificent ruins of Diocletian’s Palace, a UNESCO World Heritage Site. From Split you will then fly home after a wonderful stay in Croatia!

It is possible to extend the trip by a few nights before and after the cruise. You can also buy day trips to, among other places, the atmospheric medieval town of Trogir or the beautiful waterfalls of the Krka National Park. If you want to explore the areas north of Split, we are happy to help you tailor a nice route and book a rental car or motorhome.

Day 1: Departure from Scandinavia and arrival in Dubrovnik

Flight to the pearl of the Adriatic Sea Dubrovnik. From the airport, take a bus or taxi to the city center where your hotel is located. We are happy to help you add an airport transfer to your booking. You have an overnight stay and time to wander around the old town and harbor on your own, where you can explore Croatian gastronomy and fine wines.

Day 2: On your own in Dubrovnik and boarding the MS Dalmatia

You have the whole morning on your own in Dubrovnik before it’s time to board the MS Dalmatia. It is possible to participate in a city tour with a guide. Dubrovnik is stunningly beautiful and has a fascinating history, with influences from several different countries and cultures that have left their mark on the city through the ages. Until 1204, Dubrovnik was part of the Byzantine Empire and for about 450 years, between 1358-1806, the city became part of the Italian-dominated naval republic of Ragusa. In 1808, Napoleon’s French Empire conquered the city and soon after, in 1814, Dubrovnik was handed over to Austria, which retained control of the city until 1918. Between 1918-1991, Dubrovnik was part of Yugoslavia and since 1991 it has been part of Croatia. . Dubrovnik is today a UNESCO World Heritage Site. The guide takes you around the historic district and along the two-kilometer-long fortifications that surround the old city center. From the city walls you get an impressive view over the city’s reddish brown roof, Lovrijenacfortet and out towards the Adriatic Sea. After the tour, it’s time to choose a good restaurant for the evening’s dinner. You live on board the MS Dalmatia in the port of Dubrovnik.

Day 3: Dubrovnik to Sipan or Trstenik

You have the morning free to soak up the last of beautiful Dubrovnik, stroll along the small streets, visit palaces and churches or relax on a café terrace. The ship sails from Dubrovnik around lunchtime, through the Adriatic Sea to the island of Sipan or the small town of Trstenik on the Pelješac peninsula. Here you can take a swim in the azure waters and relax on the sun deck. It is possible to visit a local winery before having a nice dinner on board the ship. ( F , L , M )

Day 4: Sipan or Trstenik to Korčula

After breakfast, sail on to the island of Korčula, the disputed birthplace of the famous explorer Marco Polo. Lunch is enjoyed on board the ship in a bay near the old town of Korčula, which you have plenty of time to explore in the afternoon. The city is surrounded by old walls and fortified bastions that were built around the 13th century. The cobblestone alleys meander between small shops and charming restaurants. The locals proudly say that the great explorer Marco Polo was born in Korčula, something that historians do not really agree with because they think he was born in Venice. Whether the locals tell the truth or not, you will see his name and portraits in many places on the island. It is possible to take part in a wine tasting with local delicacies on a vineyard. After this, you have free time to dine at one of the beach restaurants or the local taverns “konobas”. (F , L )

Day 5: Korčula via the Pakleni Islands to Hvar

Today we set course for the first stop of the day, the Pakleni Islands, where there is plenty of time for relaxation, snorkeling and a swim before the cruise continues to Hvar. Hvar is the longest island in the Adriatic Sea with green hills, olive groves and lavender fields, as well as the city of Hvar itself, which is said to be one of Croatia’s most beautiful cities. Upon arrival in Hvar, you can choose to go on a sightseeing tour or explore the city on your own. Discover the impressive Renaissance cathedral and the oldest community theater in Europe, founded in 1612. Explore the small, cozy alleys and streets. Enjoy a refreshment on the main square of Pjaca, before continuing on towards Fortica. Here you are offered a fantastic view of the city. In the evening, try one of Hvar’s cozy restaurants and finish with a drink or glass of wine at one of the many trendy bars and cafés. (F )

Day 6: Where via Brač to Split

Today you first sail to Bol on the island of Brač, where you get to experience one of the best beaches of the Adriatic Sea “Zlatnit Rat” (also called “Golden Horn”), which extends into the azure sea on both sides of a 500 meter long tongue . It is possible to take a dip and explore the fishing village of Bol. The ship then sails on to a small bay where you can enjoy another wonderful swim or relax on the sun deck before heading to the final destination of the trip and Croatia’s second largest city, Split. ( F , L )

Day 7: On your own in Split

After breakfast, it’s time to say goodbye to MS Dalmatia, the entire crew and the other travelers with whom you have shared the sailing adventure in the Dalmatian archipelago. From the port, head to your hotel and then spend the rest of the day exploring Split’s old town. Here you will find the ruins of the Roman emperor Diocletian’s gigantic palace from around the year 300. The ruins, which are on the UNESCO World Heritage List, are spread over the old town – it’s like walking around a large museum with a fruit and vegetable market, a fish market and small, cozy shops. Just outside the palace is the promenade Riva with its cozy restaurants and cafes, where tourists and locals gather until the evening’s korzo (social gathering) for a glass of wine or espresso. ( F )

Today it’s time to leave Split and Croatia. You take a bus or taxi to the airport (we are happy to help you pre-book an airport transfer) and fly home with arrival the same day. The time depends on when your flight departs. 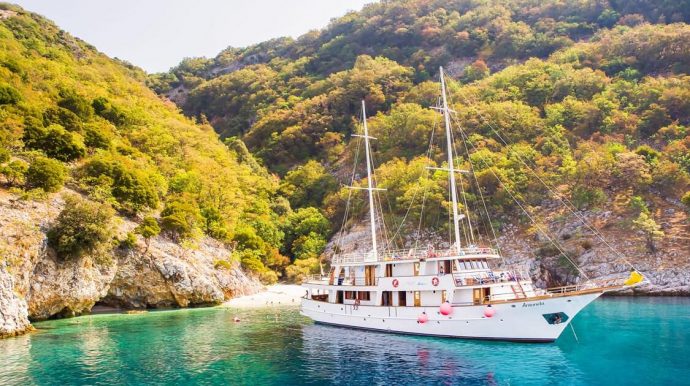