Experience two of Asia’s cultural gems, South Korea and Japan, on this 19-day tour. Ancient traditions still live here, even in the modern city of Seoul, which stands in stark contrast to the imperial city of Gyeongju. Experience the atmosphere of the demilitarized zone on the border with North Korea and look for a moment at one of the world’s most closed countries. In Busan you can enjoy the beaches and the city’s impressive fish market before traveling by ferry to Japan. Hiroshima is a must in Japan, do not miss to experience the city which was largely wiped out by nuclear weapons on August 6, 1945. The journey continues to Kyoto where there is plenty of time to explore the city’s amazing cultural treasures and bamboo forests. The trip ends in the high-tech metropolis Tokyo, where it is possible to go on day trips, including to Fuji Mountain.
An experience in itself is the fantastic food culture in the two countries. Taste your way through the many Korean variations of kimchi (cabbage) and enjoy a freshly prepared sushi at the Tsukiji fish market in Japan.
This travel proposal can be tailored to fit exactly to your wishes. For example, you can add an extra break at Fuji, book day trips or change accommodation with onsen, ryokan and / or temple stays.

Departure from Scandinavia to South Korea, where you will arrive the next day. Depending on the airline, there are one to two spaces on the road.

Arrival in Seoul. You will be picked up at the airport and driven to your hanok (living in a traditional wooden house) in the city. Explore Seoul and try local specialties such as bulgogi (BBQ), kimchi (cabbage), haemul pajeon (fish pancake) and rinse with a glass of soy (Korean rice wine) or mech-ju (beer).

South Korea’s vibrant capital is today one of the world’s fastest growing cities with ten million inhabitants. Among neon lights and skyscrapers are hidden ancient treasures in the form of old wooden houses and cozy streets. There are a number of temples and museums and an absolute highlight of any trip to Seoul is the magnificent Gyeongbokgung Palace, built in 1394, heavily occupied during the Japanese invasion in the late 16th century and then restored in 1867. Take your time to walk around the castle and its beautiful gardens. Enjoy a walk along the Han River, the city’s breathing space. Take a day trip to nearby Bukhasan National Park and DMZ (the demilitarized zone separating North and South Korea). There is plenty of entertainment in the city that offers theater, k-pop concerts, fantastic fast food, local markets, cozy cafes and great shopping. (F )

Day 5: By train from Seoul to Gyeongju

Today the train departs for Gyeongju. You make sure to get to and from the train station yourself. In Gyeongju you have two nights at a guesthouse. ( F )

Day 6: On a journey of discovery in and around Gyeongju

You have all day to explore South Korea’s former imperial capital, now a UNESCO World Heritage Site. The South Koreans themselves describe the Gyeongju area as a large open-air historical and cultural museum. Most of the historical finds and ruins date from the ancient Silla dynasty that ruled the Korean Peninsula for almost a thousand years. Explore the city’s temples, pagodas, tombs and statues. Outside of Gyeongju, you can visit the Seokguram Cave, filled with Buddha sculptures, and the Bulguksa Temple. ( F )

Day 7: By train from Gyeongju to Busan

Day 8: On an adventure in Busan

You have a full day to explore Busan and there are plenty of things to experience in and around South Korea’s second largest city. Enjoy stunning views of the city from Busan Tower, take a dip in the locals on Haeundae Beach, shop at the Shinsegae Centum City Department Store, visit the Jagalchi Fish Market, explore the Gamcheon Culture Village and enjoy a Sundowner drink and a round of seafood at Noran Mahura. If you did not get your temple needs met in Gyeongju, then visit Beomeosa Temple and Haedong Yonggungsa Temple. In addition, you will find plenty of museums, cozy cafes and tasty fast food. ( F )

Day 9: By ferry from Busan to Fukuoka

You have the whole day yourself in Busan before you take the ferry to Japan in the evening. You have a private cabin booked on the ferry. ( F )

Day 10: Arrival in Fukuoka and by train to Hiroshima

You arrive early in the morning at Fukuoka in Japan and at eight in the morning you disembark. From the port you can take a ferry to the train station, where you activate your Japan Rail Pass and continue your journey by train to the city of Hiroshima – a city marked by the explosion of the first atomic bomb in 1945. Since then, Hiroshima has distinguished itself by promoting peace and elimination of nuclear weapons. A walk through the peace park, the children’s peace monument and the nuclear dome, the remaining skeleton of an industrial hall located right where the bomb exploded, as well as a visit to the peace museum, are all strong reminders of human power and how to choose to use it, or never again.

You have the day yourself in Hiroshima. It is possible to go to the island of Miyajima, one of Japan’s most scenic areas. Here you can experience the floating red Torii gate, temples, charming streets and wildlife (monkeys, raccoons and deer). ( F )

Day 12: By train from Hiroshima to Kyoto

Today the trip to Kyoto goes by train. Kyoto is the former imperial capital and home to the country’s largest cultural treasures. The city is a central experience on every visit to Japan and offers some of the country’s most magnificent and hundreds of years old temples. There are said to be 2,000 temples, shrines, palaces, museums and traditional gardens in Kyoto. ( F )

Day 13-14: On adventures in and around Kyoto

In the next few days in Kyoto, you will be on your own with a great opportunity to explore Japan’s cultural center. This could be, for example, visiting Nijo Castle, taking a walk along the river, enjoying a tea ceremony or visiting the 8000 red Torii portals at Fushimi Inari-Taisha. It is also possible to take day trips by train to Nara, Japan’s first capital, the cosmopolitan Kobe or Osaka with its fantastic fast food restaurants. Osaka also has Universal Studios Japan. ( F )

Day 15: By train from Kyoto to Tokyo

The last train journey goes to Tokyo, where you have the next three days to explore the energetic metropolis. ( F )

After an exciting tour of South Korea and Japan, the trip goes home. You get to the airport on your own, time depends on when your international flight departs. 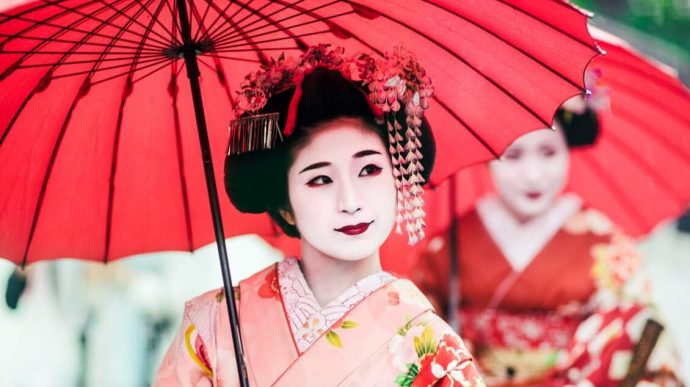