Experience the best of Croatia on this drive-yourself trip with a focus on food, wine, culture, history, nature and beautiful beaches. The Istrian peninsula offers Italian-inspired gastronomy and some of the country’s best wineries. Plitvice National Park enchants with beautiful nature. Visit the historic cities of Šibenik, Split and Dubrovnik. Finally, enjoy life in the charming port city of Cavtat. See map of Croatia on directoryaah.

Croatia is full of contrasts from the Istrian peninsula in the north to the city of Dubrovnik in the south. The trip includes flights to Pula and homes from Dubrovnik, 10 unique accommodations from historic hotels to charming old stone houses, as well as car rentals throughout your stay. You will have plenty of time to explore on your own the charming town of Pula, vineyards and gastronomy on Buzet, the spa town of Opatija, waterfalls and crystal clear lakes in Plitvice National Park, hiking in Paklenica National Park, exploring the historic towns of Šibenik and Split, and relax last off at Cavtat with the opportunity to go on a day trip to Dubrovnik.

It is possible to change the accommodation standard so that the trip fits your budget. If you want more time to explore Croatia, the trip can of course be tailored to your wishes and needs.

Today begins your adventure in magical Croatia. You fly to Pula on the Istrian peninsula in the northwestern part of the country. Pick up your rental car and drive to your hotel a little north of Pula. During the rest of the day you can enjoy the hotel, take a walk to the beach, go for a swim in the pool or rent a bicycle and explore the local restaurants and cafés.

Day 2: On adventures in and around Pula

You have all day on your own to explore Pula, the largest city on the Istrian peninsula also known as Little Rome due to the many Roman buildings in the city. The city’s landmark is the Roman amphitheater, where gladiatorial battles are now replaced by concerts. From Pula you can go on a day trip to the Brijuni National Park, which housed President Tito’s old stronghold of wild antelopes and zebras.

Today you head to Buzet in northern Istria, where you can stop at one of the underground drip caves Baredin or Festinsko Kraljevstvo. You can also visit some of the Istrian peninsula’s best wine and olive oil farms. Once at your hotel, an old traditional stone house in a small village outside Buzet, you can enjoy the beautiful and mountainous surroundings.

Most people probably associate truffles with France and Italy, but they can be found here on the Istrian peninsula. Take the car and taste the local truffle specialties in the charming medieval towns of Motovun and Buzet. From mid-September, truffle festivals are held in the area and it is also possible to participate in a “truffle hunt”. There are both white truffles (Tuber Magnatum) and three species of black truffles in the area. Today you can also visit local wineries and buy a good bottle of wine back to your hotel that you can enjoy on the terrace overlooking the mountains after a tasty day in the sign of truffles.

We recommend that you start the day early, so that you have as much time as possible to explore the spa town of Opatija and the port city of Rijeka. The fresh sea air and pleasant Mediterranean climate have attracted artists and emperors to Opatija since 1884. Here you can enjoy a walk along the Lungomare promenade, visit the city’s thriving parks and enjoy a coffee in the many cafés. From Opatija a short drive to Rijeka awaits. Few tourists visit Rijeka, which is therefore less touristy and more authentic than other coastal cities in Croatia. A must is to walk to Trsat Castle from where you get a great view of the whole city. Then drive on to your guest house outside Plitvice National Park.

Spend the day hiking and exploring the beautiful nature of Plitvice National Park, a UNESCO World Heritage Site. There are many footpaths and paths that take you through the spectacular landscape of turquoise lakes and gushing waterfalls. Here are walking trails of different lengths and difficulties – whatever you choose is one thing for sure, the beauty of the national park will enchant you! In the evening, enjoy a good dinner at Lička Kuća, where the best local specialties are served. You are not allowed to swim in the lakes or in the waterfalls in Plitvice National Park, but this is possible in the Krka National Park, which you can visit later during the trip.

Šibenik is the destination for the day, but if you still have some energy left since yesterday, we recommend that you stop at Paklenica National Park on the way. There are plenty of hiking opportunities along the more than 150 km marked routes that take you through breathtaking mountain scenery between dramatic rock formations and deep canyons. On the way to Šibenik you can also choose to make detours to the Nikola Tesla Memorial Museum and Zadar.

Day 8: On an adventure in Šibenik and Krka National Park

Šibenik is the oldest city on the Adriatic with about 35,000 inhabitants. The city’s historic center offers charming cobbled streets, 24 churches and the medieval fortress of St. Michael’s Fortress and Saint Nicholas Fortress, which was used as a backdrop for several scenes in the “Game of Thrones” series. You can also take a short drive to Krka National Park where you can enjoy a refreshing swim in the crystal clear lakes and beautiful waterfalls. F )

The longest car journey of about 4-5 hours first goes to Croatia’s second largest city, Split, where you can explore the old city center. Here is the gigantic palace of the Roman emperor Diocletian from around 300 AD. The ruins of Diocletian’s Palace are a UNESCO World Heritage Site and are scattered over the old town – it’s like walking around a large museum with a fruit and vegetable market, a fish market and cozy little shops. From Split you drive towards Cavtat, a charming port city, south of Dubrovnik. It is possible to divide the day’s trip into two parts and book an overnight stay in Split if you think that 4-5 hours behind the wheel is too much (your travel consultant will help you with this at the time of booking!). ( F )

Do not miss a visit to Dubrovnik, which is just a short drive from Cavtat. Here you can walk along the two kilometer long fortifications. From the city walls you get impressive views over the reddish-brown roofs, Lovrijenac fortress and the Adriatic Sea. There are plenty of day trips in and around Dubrovnik. Dubrovnik is stunningly beautiful and has a fascinating history, with influences from several different countries and cultures that have left their mark on the city through the ages. Until 1204, Dubrovnik was part of the Byzantine Empire and for about 450 years, between 1358-1806, the city became part of the Italian-dominated naval republic of Ragusa. In 1808, Napoleon’s French Empire conquered the city and soon after, in 1814, Dubrovnik was handed over to Austria, which retained control of the city until 1918. Between 1918 and 1991, Dubrovnik was part of Yugoslavia and since 1991 it has been part of Croatia. Dubrovnik is today a UNESCO World Heritage Site. Back at your hotel in Cavtat you can enjoy the tranquility, the view of the bay and a swim in the pool. You can choose to extend your stay in Cavtat giving you more time for relaxation and day trips to Mljet National Park and the Elafiti Islands.

With lots of fantastic travel memories and experiences in your luggage, you drive to Dubrovnik Airport where you return the rental car and take the flight home. 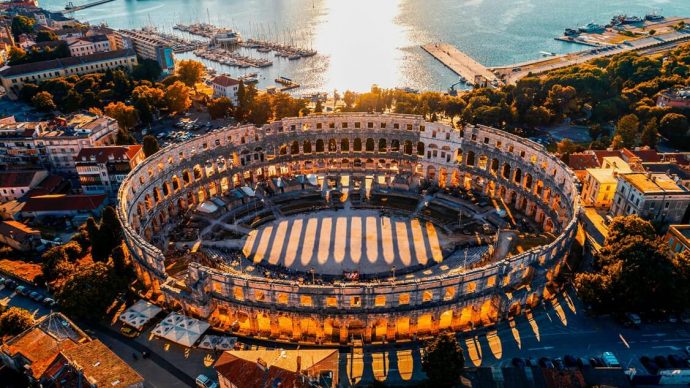